Some time ago, I replayed “Kingdom Hearts”, a game I had gone through two times prior, and yet, for some reason, this was the first time that something struck me. Video game bosses are weird. Not just the concept (why are they even called “bosses” to begin with?), but…you know what, have you ever beaten “Kingdom Hearts”? Or really, any Square Enix game for that matter. Because, sometimes, they have the absolute strangest abominations you’ve ever seen. It almost seems to be a requirement in such games that the final boss is the most distorted and ridiculous creature they can possibly come up with.

And so, when I was battling the final boss of “Kingdom Hearts” during my third playthrough, it was only now that it hit me just how goofy the end of the game is (goofy, not Goofy). Honestly. I mean, okay, I can accept the earlier fight against Ansem, when he has that funky Heartless thing hovering behind him all throughout the entire battle (which would bother me, personally, as I don’t do well with anyone breathing down my neck, monster or not-monster alike). But, then, once you beat him, you have another fight that is so much more absurd, where Ansem and his funky minion thing have somehow merged with a…I don’t know…a psychotic cruise ship of death that is floating out in nothingness, with faces all over it (including one face with a chin that could poke your eye out…nay, to be more accurate, it could poke your entire face out). And I don’t know why I never thought that much about it before, but the last time I saw this thing…

END_OF_DOCUMENT_TOKEN_TO_BE_REPLACED

In case you haven’t been following me over at Duck of Indeed (which would be weird), I recently made my very first costume. I very badly wanted to cosplay as the most awesome Kefka from “Final Fantasy VI” at the upcoming comicon, but there were really no good costumes I could buy, leaving me with no choice but to make it myself. As a result, I decided that, if I was going to put so much effort into making a costume, I might as well show it off in a costume contest. And so I did. But, more on that later. Well, I am quite disappointed to say that the comicon is now over and done with, but it was a wonderful experience that I am most excited to share with all of you. Let’s start from the beginning, shall we? (And this post is going to be a long one, but there were so many details I didn’t want to leave out. This is also doubling as a bit of a journal entry, so I can remember it in my soul for all eternity.)

I got up early in the morning, as always, and what a busy morning it was. I played some hardcore “Final Fantasy IX”, ate some French toast and bacon, courtesy of my mom’s cooking, and then not long later, it was time to get ready. I was leaving at noon to give myself plenty of time to get there for the prejudging at 2, and so I began getting dressed at 10, which was good, considering it took me far longer to get ready than I was expecting. (Just imagine how long Kefka must take to get ready in the morning.) My hair took absolutely forever, as Kefka has a short ponytail, and since I have long hair and am currently unwilling to cut it, I had to work on kind of folding it in half to make it a bit closer to how it should be. (The feathers stayed in beautifully, though. I just put the ends through the hair bands, and they stayed in super securely.) Then, the makeup took a good deal of time (you need several layers to get the white really white, I found out), as well, and since I didn’t want to practice with the white too much ahead of time and risk running out before the comicon (as I need much more of it than the red), I didn’t know how difficult it was going to be putting the red on over the white (because the white kept flaking off when I did so). But, it still turned out pretty good, nevertheless, and now I just know I want much better quality body paint for next time, as I know there are types out there that are much cleaner and don’t dry out nearly as much. END_OF_DOCUMENT_TOKEN_TO_BE_REPLACED

Today is the last day of my series of posts on what I like and dislike about the last generation of consoles, the Wii, the 360, and the PS3.  While I loved the PlayStation 2, I actually didn’t have any intention of getting the PS3 because Naughty Dog was still refusing to make any more “Jak and Daxter” games, the “Kingdom Hearts 3” release date was nowhere in sight, and because I could just keep up with the “Final Fantasy” games on the 360.  And then, because of a sale on used games at GameStop, I bought myself a few PS2 “Ratchet and Clank” games, causing me to really get into the series.  And that’s when I found myself with an unstoppable need to buy the PS3 and catch up on all the “R&C” games I had missed.  Nevertheless, at first, my PS3 didn’t have much to motivate me to play it aside from a few short “R&C” games, and I wondered if I may have wasted my money.  The console did become much better, however, when I added to my collection “Portal 2”, “Rayman Legends”, and the Final Mix version of “Kingdom Hearts”, and now I’m starting to really love it.  Not as much as my PS2, but it still turned out to be a pretty grand console.  And now, I present you with my pros and cons for the PS3!  (With the focus, again, on gaming, and information found on Wikipedia.) END_OF_DOCUMENT_TOKEN_TO_BE_REPLACED

Not long ago, I published a post discussing what I like and dislike about the Wii, and seeing as the next console of this particular generation that I bought was the XBox 360, it makes sense for Microsoft’s console to be the subject of the second post in this series.  It’s a funny thing, though, how I got this console in the first place, because I am more of a PlayStation fan than an XBox fan, so it would stand to reason that I would have been much more inclined to purchase a console made by Sony over one made by Microsoft.  Unfortunately, at the time, the PS3 was much too expensive, and it didn’t have any games I really cared for yet that weren’t already on the 360 (this was obviously before I became a “Ratchet and Clank” fan…).  Since the games I wanted at that time were all on the 360, plus that console would also allow me to play any new “Halo” games, this became the next console I added to my gaming family.

And when I first started playing the 360, I was immediately impressed with the graphics, which were way ahead of the Wii, and even though the first two games I played were not as good as I was expecting (“Banjo-Kazooie: Nuts and Bolts” and “Sonic the Hedgehog”, the 2006 version, shudder, gag, shiver), I did have a good time playing “Halo 3” (even though it was short) and “Final Fantasy XIII” (despite its flaws), the latter of which came with my console.  (I even got this little waste of time thing on one end of the console that says “Final Fantasy XIII” on it.  Jealous?)  Plus, I was just pretty thrilled that this new XBox had “Final Fantasy” games as part of its library now, as during the last generation, only the PS2 had such an honor.  My game collection was further improved with the addition of “Halo: Reach” and “Halo 4”, which were awesome, and I even had the pleasure of expanding my game library with over 40 Sega Genesis games on “Sonic’s Ultimate Genesis Collection”.  In the end, I ended up really enjoying my 360, and I loved it way more than the original XBox.  And now, anymore of my thoughts on this console will be listed below.  (As usual, my main focus is on gaming, not the other features the 360 has to offer, and extra info was found on Wikipedia.) END_OF_DOCUMENT_TOKEN_TO_BE_REPLACED

Today’s addition to my little glitch series is a common one, when things just mysteriously vanish.  Mysteriously.

Sometimes, the world falls apart around you: This happens in “Spyro” games I played on the Cube.  For me, it was quite common in “Spyro: Enter the Dragonfly” for the ground to disappear in the second world, the farm level.  So I’m walking along, and then the ground is just suddenly gone, wheat and barns and scarecrows, not to mention little, purple dragon, floating in midair.  No harm is done, but it’s rather frightening to see oblivion right there below you.  And once Spyro was riding an elevator down from Cloudy Domain in “Spyro: A Hero’s Tail”, and the world decided to disappear from below him, leaving just an expanse of yellow.  Rather worried at the apparent coming of Armageddon taking place below me, I had no choice but to continue riding the elevator down.  It eventually arrived on the ground, and everything was now black, except for Spyro, the elevator, and a distant Moneybags’ shop.  Unsure of what to do, I attempted to glide towards that shop, my single beacon of hope in a world apparently come to an end.  Here, Spyro did not meet any invisible ground.  He fell to his doom.  And I reset the game and rode that elevator nevermore. END_OF_DOCUMENT_TOKEN_TO_BE_REPLACED 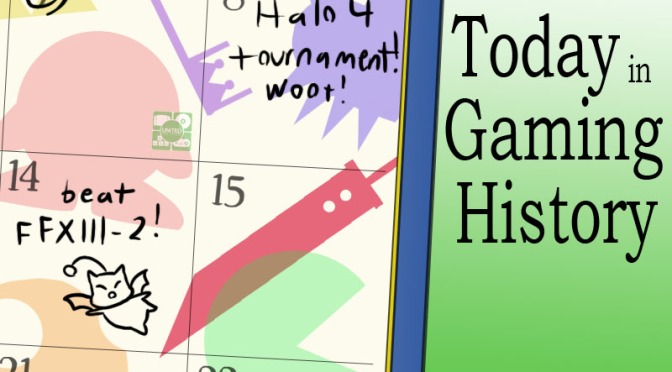 October 8, 1970: Happy birthday Tetsuya Nomura!
Where do we even begin with Mr. Nomura? How about Square, the first studio for which he worked. Founded in 1983 by Masashi Miyamoto, Square would become (and still is under the name Square Enix) an RPG powerhouse.  The first game Nomura worked on for Square was the now-classic Final Fantasy IV  (first released as Final Fantasy II in the states). From there he went on to do design work on the likes of Chrono Trigger, Parasite Eve, and Kingdom Hearts. Y’know, a few games that might have made a little money here and there…haha. END_OF_DOCUMENT_TOKEN_TO_BE_REPLACED

I have been hearing rather often over the years a lot of people saying that a game is terrible because it is different from other games in its respective series, such as the belief that “Final Fantasy XIII” and “The Legend of Zelda: Majora’s Mask” are bad games because they stray from the expected.  I am here to challenge that.

In some ways, I understand this notion.  When we grow to love a series, it can be disappointing when a game comes along that is different.  I love the “Rayman” series, particularly the gameplay of the second and third main installments, but now they’ve decided to make the next few games side-scrolling like the original.  This does upset me quite a bit, as I loved “Rayman 2” and “3” (while at the same time tolerating the exceeding silliness of the latter), and I want more like them.  At the same time, the side-scrolling “Rayman Origins” from a couple years ago was a really fantastic game, and I’m sure the upcoming “Legends” will be, as well, but at the risk of being very corny, my heart yearns for another “Rayman 2”.  It yearns, people.  I don’t like these recent changes, even if they are not bad, because I like what I have grown accustomed to.  At the same time, in no way can I say “Origins” was a bad game, despite its differences from my favorite version of “Rayman” gameplay.  It saddens me in some ways, while also providing me with a whole new way to have good, old “Rayman” joy. END_OF_DOCUMENT_TOKEN_TO_BE_REPLACED