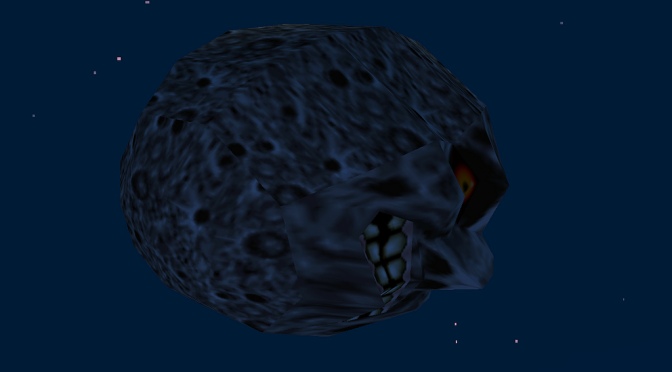 There is one song that has always stuck with me, even though the first time I heard it was 15 years ago.  This is the music that plays during the final hours in The Legend of Zelda: Majora’s Mask, during the night of the third and final day, when the moon is lowest in the heavens.  It looms overhead like the visible personification of the apocalypse.  The ground trembles, and people prepare for the end.  Some seek shelter at the ranch outside of town, clinging to the last desperate shreds of hope and the belief that survival might still be possible, while others simply stand there in Clock Town’s main square, staring up at the moon and awaiting an end that seems too inevitable to resist.

I feel this song perfectly captures the surrealism of one’s final moments, beautiful and haunting, when one looks death in the face and either runs from it or stands firm.  It is truly a chilling song, and I must admit that I was unable to listen to it for very long before I could stand it no longer.  Music, I believe, is the link between a game feeling like a real experience or an artificial one.  Not realistic graphics or fancy controls, just music, for this song fills me with dread, it leaves me feeling helpless and unable to breathe.

I know this is just a game.  I know that if I let the moon fall, nothing will happen to me.  It’s fake, just an image on a screen that can be removed with the press of a button.  But, that ethereal music is what gets to me and nearly makes me cry with the sad, sorrowful beauty of the end of the world.  This song shakes me to my very core, and that is why it resonates with me like no other.

The Duck of Indeed