The following post was submitted by Gamer Crash. See more trailers and news at GamerCrash.com!

Hey, it’s PAX Prime weekend! For those of you attending, have a great time. This also means that it’s time for another Round Up, bringing you the best trailers and gameplay from the past week. With September upon us, the ushering in of another fall/holiday release schedule is here. That also means the trailers are falling like water. So lets get to it, then!

We’re now only a few days away from what could be Kojima’s last Metal Gear game. To celebrate, Kojima himself has revealed the game’s launch trailer which he edited himself. For series fans, it’ll take you through a nostalgic journey back while showing off some crazy set pieces in the upcoming game. One thing is definitely for sure, this looks to have all the hallmarks of a Kojima game.

Cliff Bleszinski or CliffyB as he is affectionately called by his fans, finally revealed what his studio has been working on for the past year. LawBreakers is a free to play PC only shooter which looks to take elements from games like OverWatch and mix them with fast pasted action from Unreal Tournament. Both the reveal and gameplay trailers are awaiting for you below. Let me know what you think.

I’ve also got new videos for Street Fighter V, Assassin’s Creed Syndicate, Mad Max and so much more after the break, so come check out this week’s batch of trailers!

The full list of videos await you after the jump…

END_OF_DOCUMENT_TOKEN_TO_BE_REPLACED

“These waters are greedy. They will never give back what they have taken.” This is quote that, by itself, is innocent enough. However, when uttered at the right time and place, it becomes a brief glimpse into the bleak history of DisHonored‘s Dunwall city. The quote belongs not to a person, but a gift; something precious given to our character to “assist” him on his mission to right a most horrible wrong. It is “the Heart”, and it is probably the single best storytelling device produced by modern video gaming.  END_OF_DOCUMENT_TOKEN_TO_BE_REPLACED 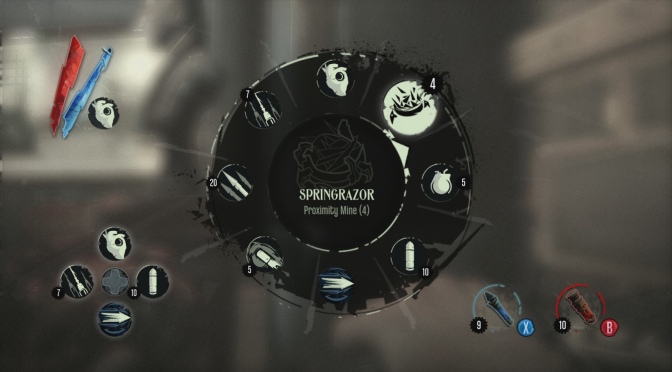 It’s not easy being a ghost. Your continued existence hinges on not being seen, and the only time you can deal with people is when you catch them completely unawares. Otherwise they’ll not only be unfazed by your efforts to remove them, but will also be able to easily overpower you with their superior weapons and legion of friends. Indeed it’s hard not to feel a twinge of jealousy towards the other guy who just charged on in and took on the whole room with their flashy abilities and deadly assortment of cool gadgets. It looks like they’re having a grand ol’ time, leaving you wondering what could ever possessed you to think that being a ghost would be good for you.

END_OF_DOCUMENT_TOKEN_TO_BE_REPLACED 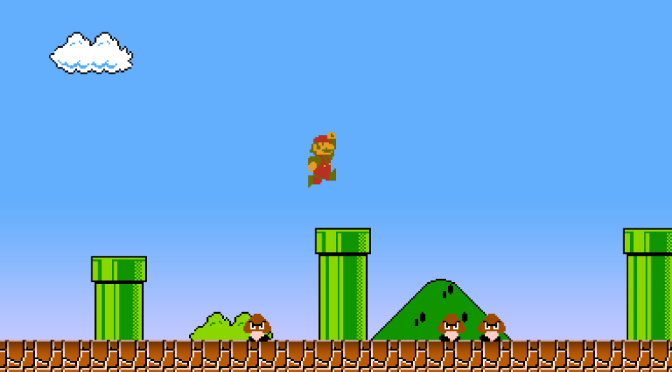 This month’s penultimate reblog features a wonderful post by Chip of Games I Made My Girlfriend Play. In it he discussed the gaming trope of the respawning enemy – commonplace for most, but perhaps not so for new players.

As someone who grew up playing video games, I often take for granted just how many tropes have become commonplace to me.  Recently, I was watching my wife’s first play-through of Aladdin on the Super Nintendo.  While she was playing, Laura became quite upset at the idea that enemies were respawning the moment she wandered off-screen.  “It makes no sense!  When I kill them, they should stay dead!”

END_OF_DOCUMENT_TOKEN_TO_BE_REPLACED 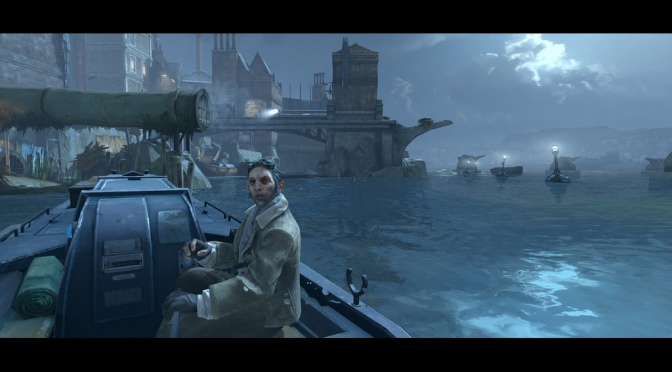 By now, DisHonored by Arcane Studios has reached the status of an instant classic. It’s unique setting, superbly-executed combat and stealth mechanics, and intriguing characters have cemented its status as one of the premier titles of the last generation. What I found to be its best and perhaps most insidious feature was its morality system, one that I believe should be the model for most future games looking to incorporate some idea of morality in their play mechanics. END_OF_DOCUMENT_TOKEN_TO_BE_REPLACED

As someone who grew up playing video games, I often take for granted just how many tropes have become commonplace to me.  Recently, I was watching my wife’s first play-through of Aladdin on the Super Nintendo.  While she was playing, Laura became quite upset at the idea that enemies were respawning the moment she wandered off-screen.  “It makes no sense!  When I kill them, they should stay dead!”

Initially, I tried to explain to Laura that traditionally, enemies respawn once out-of-sight; that’s just how things work.  I gave her examples of older games and how often this system of enemy placement occurred.  But the longer I tried to justify this idea, the more I realized that my better half was right.  It does not make any sort of sense that an obstacle, once removed, would immediately return upon looking away from it.  Respawning enemies may provide the player with a greater challenge, but this dated idea can break the game narrative and frustrate a newcomer away from gaming completely.

For so many years, I had grown to accept that enemies would reappear the moment I moved backward or forward in a game.  This is not surprising, since most of my earliest experiences with video games were the side-scrolling titles on the Nintendo Entertainment System.  When Mario tottered too far left or right in his flagship adventure, a fresh Goomba or Koopa Troopa would appear where he had previously defeated one.  Somewhere in my young mind, I must have rationalized that since Bowser did have an entire horde of minions at his disposal, it only makes sense that new enemies would appear where old foes had fallen.

An interesting side-effect of these respawning enemies was the player often had the option to avoid combat completely as he/she journeyed across the screen.  In Mega Man 2, my brother and I would use the temporary invincibility of taking damage (another odd gaming trope) to bypass whole swaths of obstacles.  Part of learning these older games was figuring out when discretion was the better part of valor.  Once you determined that enemies were going to keep on reappearing no matter how often you defeated them, the new goal of a game became passing through an area as quickly as possible.

As time passed, and games required more time, staff, and piles of money to produce, the idea that a player would avoid battles to progress in a game became an issue to the industry.  Additionally, worlds were being built in glorious three-dimensions, so the player had even more space to avoid combat and race to the finish.  When so much effort had been put into the character models and combat systems of a game, developers needed a new method to keep players engaged for longer periods of time.  Then, an idea struck: what if players had to defeat all enemies in an area to move forward?  From this notion, a strong fork appeared in action/adventure games.  One path led to titles such as Super Mario 64 and Spyro the Dragon, where the focus was on collecting items in an open world and combat was only obligatory when facing a boss.  The other path led to games like Devil May Cry and God of War, where elaborate combat and cinematic battles were kings of design.

The idea was simple: action games would provide players with a story, which would be doled out in-between grand battles that could not be avoided.  A hero on a quest would logically encounter obstacles in the form of enemies, but to ensure that a player would take care of these foes, magical or environmental barriers would be placed and only removed once threats were eliminated.  When Dante is faced with a gaggle of evil puppet demons, a magic seal is placed over the exits until all of the marionettes are defeated.  This system of forced battles and enemy placement became the new norm, and a slew of series adopted the trope.  But this seemingly novel approach actually made its debut in the arcades many years earlier.

For a time before Street Fighter II overtook the arcades and turned them into virtual dojos, the side-scrolling brawler ruled the screens.  Games like Double Dragon and Final Fight gated player progress with obligatory battles long before modern action titles.  When a street-brawling hero wandered into a new location, the screen would stop, a group of enemies would gang up on the protagonist, and a player could not move forward until the area was cleared.  At the time, the point of these gated battles would be to drain a player’s health and lives, which would force a player to drop more quarters to continue, thus a profit is made.  Now that this trope has become mainstream once again, we are left to wonder the reasoning behind these design choices, particularly since most console games are a one-time purchase.

One common argument revolves around the idea that the value of a game is the length of time needed to complete the main storyline.  When a new game costs over 60 dollars, it is understandable that a consumer would want to get their money’s worth in gameplay duration.  It is for this reason why many developers will pad a game’s length with forced battles.  For example, it took Laura and I roughly a week to complete Bioshock Infinite.  Much of our time spent playing was fighting off wave after wave of enemies in gated battles that barred our progression of the story.  If it were not for these battles (or Eilzabeth’s sub-par lock-picking skills), Laura and I would have breezed through the game in a much shorter amount of time.  Conversely, my playthrough of Dishonored took less than two days to complete, and I spent most of my time Blinking away from combat, focused on the narrative goals in Dunwall.  Both of these games cost $59.99 at time of release, but logic dictates that the longer game is of greater value, right?

Actually, I found that being forced into battle over and over with no option to move forward until all enemies are dealt with detracted from Bioshock Infinite’s greater narrative.  I was often frustrated that my exploration of the gorgeous and detailed land of Columbia was being interrupted by some guy shooting at me.  The trope of forced battles did not strengthen the game, but weakened my engagement and enjoyment of the title.  Additionally, by forcing the same scripted battles on the player with every single playthrough, there is little reason to replay a game more than once, save for the meager variety in weapon options.  On the other hand, giving a player the option to avoid combat provides a greater variety of play styles, which will (hopefully) lead to more replays.  After beating Dishonored on a non-lethal playthrough, I still had the opportunity to play the game with reckless abandon, fighting every citizen who dared to look my way.

I guess Laura was right: it is silly that an enemy would respawn the moment you look away.  The notion that a game’s challenge comes from a constant barrage of reappearing baddies has become rather dated.  But the supposed alternative is not much better.  Gated battles and forced skirmishes do not always lend to a game’s worth.  There needs to be a middle ground, a place where these tropes do not exist and more choice is put in the player’s hands.  After all, some people want to experience endless battles that could never happen in real life, while others want the freedom to become fully immersed in a story that is not their own.

-Chip, Games I Made My Girlfriend Play