To this day, I still don’t know how I managed to choose Super Metroid.

Lets face it, 1995 was a completely different era for gamers. It was the age of Super Nintendo vs Sega Genesis, Mortal Kombat was still considered to be extremely controversial, Nintendo Power was a huge selling magazine, game purchases were done only in big retail stores and more importantly, online blogs, game sites, and social media didn’t exist. I know to many of you, I just blew your mind, but yes, buying a game was a major process back then and usually involved trying to convince your parents to shell out the necessary money.

Walking around the local Toys ‘R’ Us (when they used a crazy yellow ticket system to purchase games), I can remember coming across a game called ‘Super Metroid’ featuring a character in a orange suit fighting a dragon like character. I had played the original Metroid years before on the NES, but I’m not sure I made the connection. You see, I had never played Metroid to completion as back then in my young age, that wasn’t why I played games. I played to have fun and also lacking any sort of direction, I never made it very far. For years, Super Metroid would act in a similar way, more as a playground than something I pushed to complete.

The magic of Super Metroid for me came from that game’s ability to tell a compelling story without the use of things we see now a days in cutscenes or character dialogue. When booting up the game, the only time you’ll see story based text is at the very beginning from the heroine, Samus Aran, giving players a quick overview of the story so far. Amazingly, the game’s story really unfolded through player exploration. You see, the entire map was open for the player to explore as they see fit with the only requirement being that you found the necessary tool or weapon in order to access the place where you want to go. These days we call these types of games “Metroidvania” so you can see where that term originates from. Navigating to different zones changed the music and visuals of the area around you giving way to new enemies and challenges to overcome. This style has also made Super Metroid a prime candidate for speed runners, showing off incredible feats and ways to get around locked off areas in abnormally short amounts of time.

Other elements of Super Metroid that really stand out for me are the boss battles sprinkled throughout the world. Each zone typically had a mini-boss along with an end boss battle and each proved to be challenging yet extremely memorable. I can remember the first time I entered Kraid’s lair in Brinstar, the music gave way to a more ominous sound letting you know that something was coming. Entering into his chamber the floor crumbled away and this three screen high monster rose up forcing you to climb the room to his head level to shoot a few missiles into his mouth.

Fighting the spirit monster Phantoon on the Wrecked Ship was also a standout moment for me. As you enter this crashed ship on the surface of planet Zebes, the power has been completely sucked dry. You’re navigating through this now derelict ship looking for any signs of life. Your scanners sense a power spike coming from one of the central locations on the ship where you eventually come upon this odd looking creature known as Phantoon. Turns out, this spirit has fed on the raw energy of the ship and can phase in an out during the battle. It’s a tense, exciting fight and victory means the ship’s power and systems are restored.

Lastly, the progression system in place isn’t anything to write home about with what we have these days, but back then it did a really great job of making you feel like a complete badass. Starting the game relatively weak, you continually upgrade and grow in power during your time on planet Zebes. Even though you’re a full equipped badass bounty hunter, you never quite feel like you’re overpowered as the game does an excellent job progressing with you.

Even to this day, Super Metroid manages to capture what I feel is great about video games. While many games just don’t stand up against the test of time, for me, it’s still incredibly fun after all these years. Samus Aran and Super Metroid is main reason why I still have my old SNES with me and feel compelled to return to Zebes to face off against Mother Brain every few years. In fact, I think I’m a bit overdue.

Thinking back, I still really don’t know what appealed to me about Super Metroid, but I’m glad I took the chance on it. It’s one of my favorite games I’ve ever played.

Derek of GamerCrash.com had the honor of kicking of this most epic of top 10 lists for us! If you liked what he had to say about Super Metroid, why not head on over to his site and see what he has to offer on all the most recent gaming happenings and rumors!

Shadowrun is a franchise that many gamers hold near and dear to their hearts. Last year, Shadowrun Returns marked a comeback for the dormant series and released to stellar reviews coming from Harebrained Schemes, a studio made up of industry veterans such as Jordan Weisman, Joe DiNunzio, and Mitch Gitelman to name a few.

Recently, I was extremely fortunate to speak with Harebrained Schemes co-founder, Mitch Gitelman to talk all things Shadowrun and the daunting task of bringing this classic franchise back into the spotlight for a new generation. If you’ve ever wondered what it’s like behind the scenes over at Harebrained Schemes, what it was like to bring a classic franchise back, or want to know just who these guys are, this is an interview you can’t afford to miss.

Big thanks to Mitch for taking the time to speak with me and to Robin for setting this all up.

I’d also like to take this opportunity to tell each and every one of you to go grab a copy of Shadowrun Dragonfall when it releases on Windows, OSX, and Linux this Thursday, Feb 27 for $14.99. So make sure to run, not walk, to the nearest computer and grab it once it’s available.

Full interview after the jump..

END_OF_DOCUMENT_TOKEN_TO_BE_REPLACED

My childhood was dominated by Nintendo, it’s fearless red plumber and his crew. My first exposure to the world of video games came when I was very young with the Nintendo Entertainment System and of course, Super Mario Bros. It’s safe to say, I was hooked for life after pushing the jump button on the controller for the very first time. I’ve gone on countless adventures with Mario from his 8 bit days, all the way to modern times so there’s a lot of material to draw from when thinking about what aspects of a franchise you love. Have you ever stopped to think about why the Mario franchise continues to be a force after all these years?

As any person who is invested in games can tell you, the levels themselves are what make these platformer games great. I mean, think about it for a moment. Pretty much 100% of your time is spent running and jumping through them so if the levels are boring or poorly made, the game as a whole will suffer. That’s the key to understanding why Mario is consistently great. It’s the level design that shines through. END_OF_DOCUMENT_TOKEN_TO_BE_REPLACED

Well known for their work on PlayStation Network with hits like Super Stardust HD, Dead Nation, and the recently released, Resogun, there’s no denying that Housemarque is a household name among PlayStation fans. With as many top notch games as they’ve put out, have you ever stopped to think how well you really know the developer?

I recently had the pleasure to chat with two members of the development studio, Tommaso De Benetti and Mikael Haveri, who gave me some insight into who they are, what it’s like to work on some of these great titles, and also a hint at what’s to come. It was great to get a peak inside the oldest game company currently in Finland and also what it’s like to develop one of the best PlayStation 4 titles currently available right now. END_OF_DOCUMENT_TOKEN_TO_BE_REPLACED

Even though 2014 is upon us, why not take a step back from and have one final look back at 2013. This year is going to get pretty busy with new releases soon enough, so the time is right.

2013 was an interesting year from a reporting standpoint as it marked a transition between the current generation of consoles into the “next gen” world of Xbox One and PlayStation 4. Even though we’re now heading into new and exciting “next-gen” territory, there were a number of very strong and fantastic AAA experiences given last year and I’d like to highlight some of my favorites from the year that was. END_OF_DOCUMENT_TOKEN_TO_BE_REPLACED 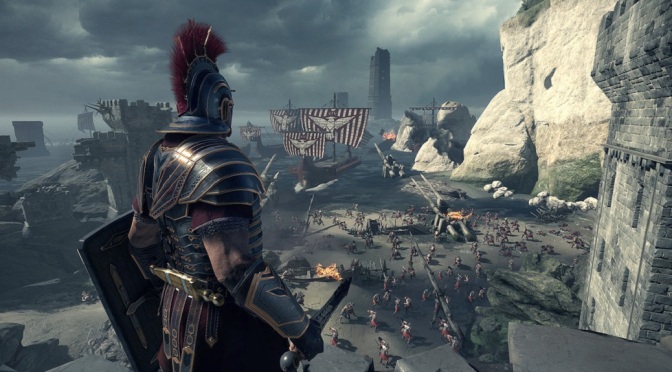 It’s fair to say that Ryse: Son of Rome has had a difficult time gaining traction up to its release after officially debuting at Microsoft’s E3 press conference last year. While the game impressed visually, critics and the public seemed concerned about the extensive use of quick time events and also what the combat would play like. From there on Crytek worked to fix and alter many of the criticisms first levied at the game before its eventual launch day release with the Xbox One. Ryse: Son of Rome is set during the reign of Nero in ancient Rome and takes players on a quest for revenge after a barbarian raid on the city. Is Ryse: Son of Rome a worthy contender in the arena or should it be fed to the lions?

Interestingly enough, Ryse decides to tell its story out of order. You start at the end, only to revisit essentially how you got to where you are now. You play Marius Titus, a hero to his fellow soldiers, a proud Roman soldier, and someone who’s willing to risk life and limb to get the job done. While on the outside he simple appears as a dedicated soldier, Marius has a darker goal of extracting revenge on those that killed his family during a barbarian raid on the city. This gives him his drive and ultimately will take us from the crowded streets of Rome to the dense forests of Britannia. For what it’s worth, I was never lost or confused along the way even through out the many twists and turns the story takes. END_OF_DOCUMENT_TOKEN_TO_BE_REPLACED

Assassin’s Creed has always held a soft spot in my heart. Bringing historical fiction in line with engaging gameplay is one of the many reasons why I love this franchise. Being able to set foot in places you only read about in history books is just thrilling for me, I mean, where else can you explore Renaissance Italy and bump elbows with the likes of Leonardo da Vinci or Cesare Borgia?

While the first game had some rough patches, I was in love from the moment I climbed up my first tower in Jerusalem. That same affection only increased as the Ezio trilogy kicked off and I was treated to such locales as Rome, Venice, Florence, and Constantinople to name a few. Sure, it hasn’t always been smooth sailing but for a quick history fix, nothing could satisfy me quite like the Assassin’s Creed franchise. Then came Assassin’s Creed III. END_OF_DOCUMENT_TOKEN_TO_BE_REPLACED