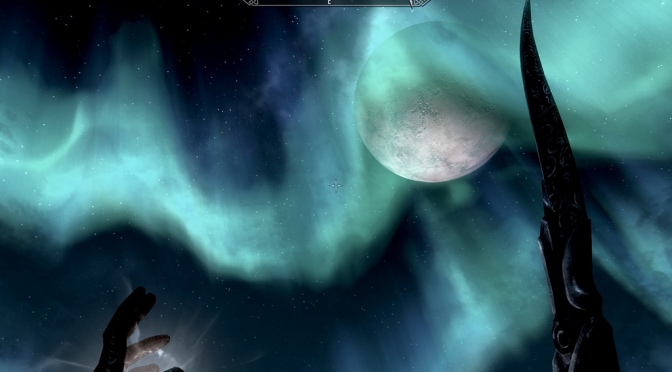 Merry Listmas everyone! So psyched to be doing this again! Strange thinking that we’re almost at the end of 2014 isn’t it? This year just flew by in a whirlwind of high-profile releases and just as many controversies. Bugged launches and disappointments abounded this latter half of the year, and while I did enjoy the games I played I could help but find myself looking back at the games of years gone by. I’ve been thinking about revisiting quite a few of them lately , so why not make a list? That’s what Listmas is all about right?

This game has been calling my name like no other lately, so I can’t wait to take up the mantle of the dovahkiin once more. I’m going on 2 years since having put it down now, perhaps the time to return has finally come; this time as a sneaky Argonian mage!

There was a time when I called myself a fan of Assassin’s Creed, and was all because of this game. True the controls are now dated compared to the current entries into the series, but I still think this is the pinnacle of he franchise! It’s an open world, but with little of that same-iness that found in so many modern games. Assassinations, platforming, mind-bending puzzles, a plot that’s actually interesting. It’s all there, just waiting to be experienced anew!

Also known as Assassin’s Creed: 2.5. This one still has all the good of Assassin’s Creed 2…just less of it. I’m mostly looking forward to the Assassin training and stealth missions when time comes to pop it in the ol’ 360 again.

Okay, I’m cheating a little bit here since I’ve never actually played this game. I’ve just been hearing its praises for so long that I’ve decided that 2015 will be the year I finally bite the bullet and dig into it! I even went so far as to get the actual cartridge for my Super Nintendo! All that’s left is to get started…

Going through this is a matter of just finishing it this time. See, I got the game back when it came out and was actually very much a fan of the combat system. The problem was that I just wasn’t very good at it. I got as far as Barthandelus and could progress no farther…well not until I “adjusted” my save file that is. It’s not the best Final Fantasy I’ve played, but I just don’t like the fact that it beat me. That changes next year!

Similar situation with this one. However, rather than getting stuck on fight, this was a case of the story completely losing me and me losing my interest as a result. Still have the game, so if I’m going to go through the trouble of beating the first one I’m thinking I should take this one one too while I still have the momentum going.

Seems like there’s a bit of a pattern here isn’t there? Yup, I didn’t finish this one either. Unlike the other two though, I’m not sure what cause me to put this one down. It came out around the time Infamous: Second Son did, so I must have just gotten distracted. This one can’t site any longer though, I really love the streamlined combat (that and being able to wield the Buster Sword again!) so having this one site unfinished is just unacceptable!

There’s another Arkham game coming down the pike and sadly I can’t seem to muster very much excitement for it. After Arkham City and Arkham Origins, it looks like Arkham games are going to continue following an open-world model. That’s fine and all,  but to me they will never be as good as Arkham Asylum’s carefully crafted encounters and tight, focused plot. It’s time once again to take up the ol’ cape ‘n cowl in the Batman’s first and best last gen outing.

Yeah…I haven’t played this one yet either. All of my knowledge of this one is cobbled together from what I’ve read on the internet and for a Metroid fan, well that just can’t stand. I’ve played every major entry in the franchise except what is arguably the most important one. Need to fix that…

10. The Legend of Zelda: Majora’s Mask

Simply put, Majora’s Mask is my game. I could probably play through it 50 more times and still not get tired of it! This is the one and only game I make sure to revisit every year, so of course I’m gonna include it here!

With four Final Fantasy games on here getting though all these might wind up being a tall order, but then again just getting through a game really isn’t the point is it? This next year is going to be great!

What games are you planning on replaying next year?