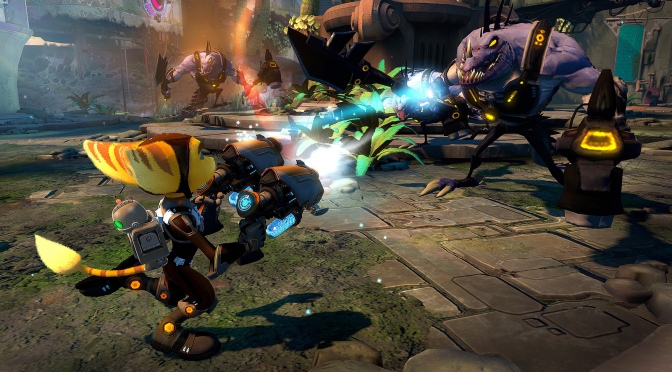 I went on a bit of a spending spree around Christmas time. When I was stocking up on supplies for this year’s masquerade, I decided, while I was at it, I might as well buy a whole bunch of Ratchet and Clank figurines. As if that wasn’t enough, I also decided this was a great time to catch up on some of the games I had missed from the series, as well, so I went ahead and bought Quest for Booty and Into the Nexus (the latter was just $10, which was a pretty good deal, I think, and I am well aware of the fact that Nexus is supposed to come with a downloadable copy of Quest for Booty, but I like hard copies, darn it!).

Now, the reason I didn’t bother buying these games at first was because I heard they were short. I mean, it’s great that Insomniac has been making so many R&C games, but any joy this might bring is greatly lessened when many of their games lately are so absurdly tiny. I don’t want to spend all that money on a game that’s 5 hours long. I know they are priced cheaper than typical games, but I’d much rather pay full price for a full-length game myself. And yet, the pain of feeling left out spurred me to buy these games to see what I had been missing because I am weak like that.

Well, I started out with Into the Nexus, and while it was packed with fun, I have nothing to say about it. I mean, they had some pretty cool planets to check out (Yerek and Silox were pretty fun, plus I love abandoned towns), and the Netherverse levels that Clank got to explore were pretty challenging (and they have a whole Zurkon family now!), but it was so darn short, which in turn made the story feel a bit rushed. I would have liked to see more of Vendra, as I found her rather interesting, but…you already know my issue, right?

So, whether or not I would recommend this game (same goes with Quest for Booty, which will surely be done by the time this post is published) depends on how much you’re willing to spend on something so short. And so it got me thinking, what is the minimum length a game needs to be before you’ll buy it? Games cost so much nowadays, and there are so many to choose from, I’m sure most of us would rather get a game that feels like a good use of our money.

I think my ideal length for a video game is 20-30 hours. 40 hours if it’s a really fun game. I typically play an hour a day, and I like my games to at least take me 3-4 weeks. That changes depending on the game, as platformers usually take me 2 weeks, while RPG’s often take me 2 months. Of course, there are exceptions, like Jak and Daxter: The Precursor Legacy, which I can zip through in the span of a single morning when I’m feeling crazy, and I thoroughly enjoyed Portal 2 despite its length because it was such a unique concept. It’s not that I thought Into the Nexus wasn’t worth the time or the money spent on it. I simply thought it could have greatly benefited from being longer, whereas the other two games I mentioned were the perfect length for what they were. And you may have noticed that this is a short post. Well, now you understand my pain. Unless you’re glad this post is shorter than usual….

So, what is your ideal length for a video game? Do you prefer games you can lose yourself in for months, or do you enjoy short games that require less of a commitment?

A Duck That Is Also Too Short…

18 thoughts on “Into the Nexus, I Hardly Knew Thee”