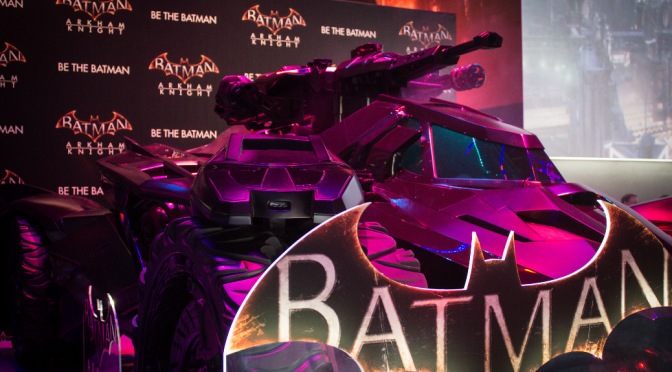 A couple days ago, an announcement hit the airwaves that the highly-anticipated Batman: Arkham Knight is going to be rated “M” for mature. (Rocksteady’s previous Batman games, Arkham Asylum and Arkham City, as well as WB Games Montreal’s Arkham Origins, were all rated “T” for teen.) In an interview with IGN, Rocksteady’s founder and Arkham Knight Director Sefton Hill noted some surprise about the rating. But he also pointed out that though Arkham Knight is “dark” and contains “bad stuff,” it will be the game the company wants to deliver to players. Responses to this seem to have mostly ranged from “Way to go Rocksteady for sticking to your principles!” to “So?” As for me, I’m just looking forward to playing it.

But then again, that’s easy for me to say. I’m an adult (so says my driver’s license), I don’t have children, and therefore I don’t have much reason to pay attention to game ratings. In fact, because of that second point (no kids), I don’t even feel like I have much to say on ratings themselves, because personally, they are a non-issue. Besides, we all know that ratings of any sort aren’t necessarily flaming adamantium gates guarded by Cerberus, the Sentinels, and Leatherface. Many of you have probably heard the 10-year-olds playing Call of Duty. Many of you have probably heard younglings quoting Scarface. And many of you know that the Internet itself is riddled with easily accessible illicit content of all sorts.

Thinking back to that time when the Entertainment Software Ratings Board (ESRB) became a thing in the mid 1990s, which became a thing partially in response to all the hubbub surrounding blood-ridden violence portrayed in some video games of the time, such as DOOM and Mortal Kombat, video game ratings didn’t exactly mean much in my house. And that’s saying something because R-rated movies were pretty much off limits at all times. But those M-rated games…well, we had them, and we played them. For a long time my folks regulated our (me and my two younger siblings) video game habits by buying us all things Mario, Mega Man, and Donkey Kong. But they didn’t stop us from renting or borrowing (or even buying) the likes of DOOM or Mortal Kombat. It’s kind of interesting to consider in hindsight, because I know that one time we rented both Mortal Kombat II and The Lion King from the local video store, and my mother didn’t bat an eyelash.

While I don’t think my parents were completely oblivious to the news surrounding video games at the time, I also don’t know just how much stock they put into the issue of violence in the media. The only time they got really hopped up on, say, violence in the movies, was when things got really gory (or sexy). Fantasy violence, science-fiction violence, and comedic violence all got passes, as did video game violence apparently. There were times where they’d watch a movie beforehand and make a decision as to whether or not it was appropriate for the children, but they never played a minute of DOOM (well, to my knowledge, anyway).

None of this is to downplay the effects violence can have on some children (and even some adults). If I had children, and if those children were interested in video games, I would probably steer them away from mature games until some vague point where I’d think they were old enough to handle them, if they wanted to handle them at all. I know that I’m not inclined to get really enjoyable M-rated games for my pre-teen niece. (Besides, she would probably play Minecraft all day, every day if she could. And there’s a game that, one could argue, is a little aggressive at times).

I’m also sure that Arkham Knight will likely top the charts this summer despite its “M” rating. But there’s an interesting question there, because in the IGN interview, Hill noted that Arkham Knight is not going to be replete with gore and curse words. Rather, it’s going to go to some “dark places,” which brings my traditional thinking of the “M” rating into a new light. Because with this game, it sounds like we’re not talking about a sex and violence “M” rating as much as a crises of choice and sinister actions and reactions “M” rating. More psychologically mature than blatantly mature (i.e. with obvious adult content)? Just a guess. To be sure, we’ll all have to wait until June to find out.

Where do you stand with game ratings? Are they useful and helpful tools for parents in charge of game-savvy children? Have game ratings evolved with the times, or do they need to evolve to include more nuanced definitions of age-appropriate standards?